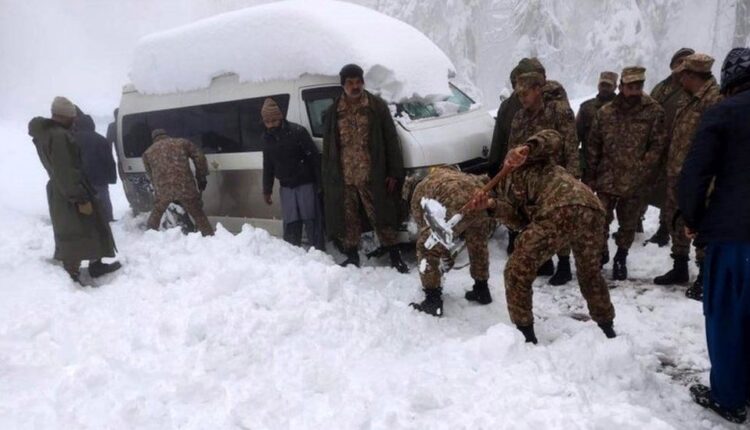 At least 21 passengers have been confirmed to have died and dozens of others still trapped after heavy snow held back their vehicles in the northern region of Pakistan.

The deceased people were said to be among the passengers that board about 1,000 vehicles that got trapped on a highway in the region.

It was learnt that the country’s military, on Saturday after the disaster occured, have been deployed to the scene to clear roads and rescue those still trapped near the hilltop town of Murree.

More than 100,000 cars had entered Murree in recent days to see the unusually heavy snowfall. This caused a huge traffic jam on roads leading in and out of the town, police said.

Police said at least six people had frozen to death in their cars, but it is not yet clear how others had died. Asphyxiation after inhaling fumes has been given as a possible reason.

The area has now been declared as a disaster area by the emergency officials conducting search and rescue operations within the axis and has urged people to stay away from the location in order to complete the exercise without further delay.

“People are facing a terrible situation,” Usman Abbasi, a tourist stuck in the town where heavy snow was still falling, told newsmen during a telephone conversation.

“It’s not only the tourists, but the local population is also facing severe problems” including gas and water shortages, Abbasi added.

Confirming the tragedy, Interior Minister, Sheikh Rashid, assured the public that those still trapped would be rescued by the emergency officials deployed to the scene.

“For the first time in 15 to 20 years such large number of tourists flocked to Murree, which created a big crisis,” Rashid added in a video message.

Prime Minister Imran Khan expressed shock over the “tragic deaths” of the tourists.

“Have ordered inquiry and putting in place strong regulations to ensure prevention of such tragedies,” Khan said in a short message released through his verified social media handle.

Murree is a mountain resort town north of the capital Islamabad. Local media reported on Friday that tourists were getting stranded due to snow.

Murree was built by the British in the 19th century as a medical base for its colonial troops.