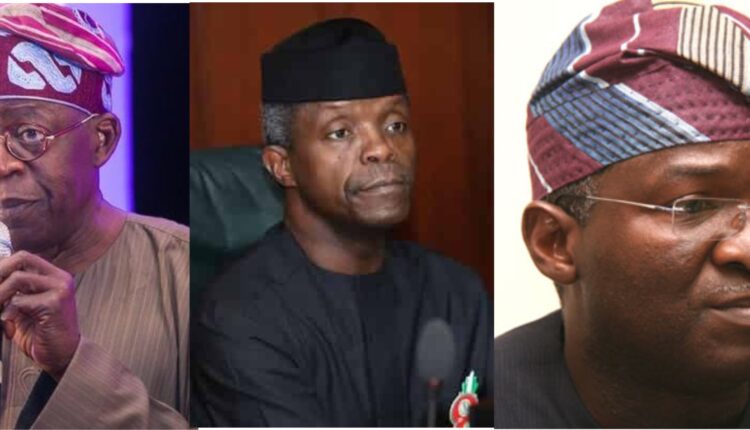 1. Professor Yemi Osinbajo [Competent, Prudent, Detribalised, GOD-fearing, Tested & Trusted by the people]. As acting #President twice, he was phenomenal. I learnt the current VP is President  Muhammadu Buhari’s preference but some of the hawks around #Buhari can’t stand such a competent man who can move #Nigeria forward.

2. Babatunde Raji Fashola. He was a two-term Governor of Lagos State with indelible imprints. He is the current Minister of Works & Housing. [Competent, Detribalised, Hardworking, Fair-minded]. He is close to the corridors of power. Though a Muslim, his wife is a staunch Christian. Buhari may only endorse him if his kitchen cabinet believes a Muslim-Muslim ticket will fly because the VP candidate from NW will likely be a Muslim].

3. Mr. Peter Obi. Two-term Governor of Anambra State. [Competent, Prudent, Detribalised, Hardworking]. His major flaw is that he seemed to be politically tied to Atiku Abubakar’s apron strings and may not be willing to compete against his jaded boss. Secondly, his party, the #PDP is stuttering.

4. Kayode Fayemi. Two-term Governor of Ekiti State, Chairman of Governors’ Forum [the most powerful political bloc in #Nigeria], and former Minister of Mines. His most impressive public performance to date was as a Minister. [Smart, Detribalised, Bridge-Builder]. He is trusted by Buhari’s inner circle. He can make a difference if he chooses to. Some impeccable sources said he is currently the most favoured by #APC’s biggest power brokers to succeed Buhari. He has a lot of work to do to positivize his perception by the public.

5. Donald Duke. Two-term Governor of Cross River State. [Tested, Trusted, Detribalised]. Major drawback: he is in a political wilderness. He needs to find his way back to a major political bloc to stand a chance. Under him as President, the $9 trillion tourism sector will receive a booster shot.

6. Akinwunmi Adesina. President of Africa Development Bank and one of Nigeria’s most outstanding Ministers of Agriculture ever. He is the best material for the position now but is he willing to throw his hat into the ring? The Nigerian political class also does not like an outstanding personality that can put a stop to their relished seasons of anomie. Except by a stroke of genius, his party, the #PDP is currently too weak to challenge for the Presidency within the time left for the next election and its leaders are also not doing much to improve on their shortcomings.

7. Gov Nyesom Ezenwo Wike – CON. Currently serving his second term as Governor of Rivers State, Wike was also a former Minister of Education. He is an achiever who has transformed Rivers State but he is perceived as cantankerous. Some doubted if he would have the Presidential temperament and if he would be fair to all sections of the country. Besides, his party, the People’s Democratic Party – PDP is weaker than ever, losing key members in droves in the build-up to 2023.

8. UDOM Emmanuel is currently serving his second term as Governor of oil-rich Akwa Ibom State. [Competent, Prudent]. Since he became Governor, his focus has been the industrialisation of his state. Gone in the state was the era of profligacy he inherited. He is also a fighter but there are doubts about his credentials as a leader who will work to sustain Nigeria’s profile as one united entity. Agitation for the separation of Akwa Ibom from Nigeria has grown during his tenure with a group even making a presentation to the United Nations for the creation of Ibom Republic.

9. Ngozi Okonjo-Iweala. A two-term former Minister of Finance. As Coordinating Minister of the Economy, she reined-in cabinet members during the wayward government of Goodluck Jonathan and prevented the deeper economic apocalypse the likes of Diezani Allison-Madueke would have inflicted on the nation. She is currently serving as the DG of the World Trade Organization – WTO. She probably would not drop certainty for uncertainty. She is not expected to even contest for her party’s ticket where the wolves will readily subdue the dream.

10. Dark Horse. The nation needs a young, electrifying, and politically savvy Nigerian with a good pedigree who can burst unto the political scene any moment from now and create a momentum that will awe everyone. The country is tired of both the #APC and the #PDP. They have let the people down! Nigerian politics needs an injection of thumping adrenaline; a hope for a new beginning. If such a young leader can emerge, and build formidable machinery that can convince the people that he is the viable alternative they have been longing for, nothing can stop that movement.

NOTE: To arrive at this pick, I looked at the potential impact the person will make as President and the chances of making it to Aso Rock. I deliberately did not pick a northerner. I’m really enamoured by the values Amina J Mohammed represents but only a chronic and unrepentant enemy of Nigeria’s unity will at this point root for a northern candidate for the 2023 Presidential election.