2023 Poll: When will this political rascality end 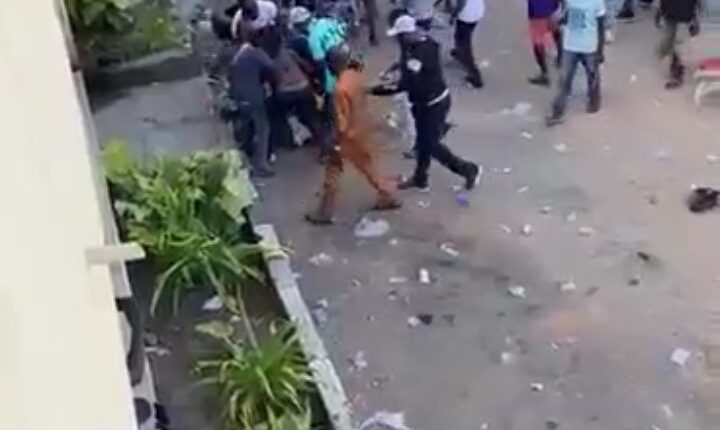 Share
The build-up to every general election in the country comes with fears and uncertainty in the minds of millions of Nigerians. This is because of the huge violence that usually characterized the season.
The 2023 General elections are just about nine months from now and some of the signs that do not require an explanation from anyone to know that the season is almost here are already with us.
History had shown that the show of violence during the political season is more within political parties than interparty. This development is more visible in a ruling party either in the Local Government, State or Federal. Your guess is as good as mine why the development is the order of the day. Party members believe that those who emerged as the candidates during the primary election, had a better chance of winning the contest, especially through the power of incumbency and not necessarily by showcasing their good performance.
The question is when will this political madness end? The lack of internal democracy and ideology among political parties in the country has been blamed for the violence and other ugly incidents witnessed during electioneering campaigns.
The deliberate impoverishment of the people by the system manipulated by politicians is another source of worry. The sporadic shooting in Coker-Aguda Local Council Development Area (LCDA) on Friday May 27th easily comes to mind. In fact, the shooting started a day easier.
When the shooting continues unabated, the best option before me was to put a NEWS ALERT to inform my colleagues of the current happenings in my area. Below is the message
“NEWS ALERT: Sproradic gunshots rent the air again in Coker Aguda in Surulere. The latest ugly development began yesterday afternoon due to the ongoing APC primaries held in Sanya. Residents and business owners are in a panic mood, shock, and disbelief over those responsible for the sporadic gunshots. They are also appealing to security operatives to swiftly swing into action and fish out those behind the act”. End of quote.
My initial thought that the violence was peculiar to my area was defeated when I started receiving information on the same incident from other election venues across the state especially, Alimosho, Mushin, Lagos Island, Ikorodu, and Ojodu.
The question is when will this madness end? I saw gory videos and pictures of people with gunshot wounds and how the venues of primary elections turned into a war zone by supporters of those standing for election. Bear in mind, that the discourse cut across political parties.
Few questions to ask; Should we allow this to continue, the answer is no. Must our politicians learn to play by the rules and accept defeat with dignity, the answer is yes. Must security personnel deployed to maintain law and order demonstrate full commitment to their job and not take sides, the answer is yes.
Must young men continue to risk their lives for politicians because of inducement, the answer is no.
If we can all answer these questions correctly, I believe the question “when will this political madness end” will no longer agitate our minds.
Taiwo Olapade, is a Lagos-based Broadcast Journalist and public affairs analyst.

How 31 guests died during free-food stampede in Rivers