2 die, others injure after auto crash in Lagos 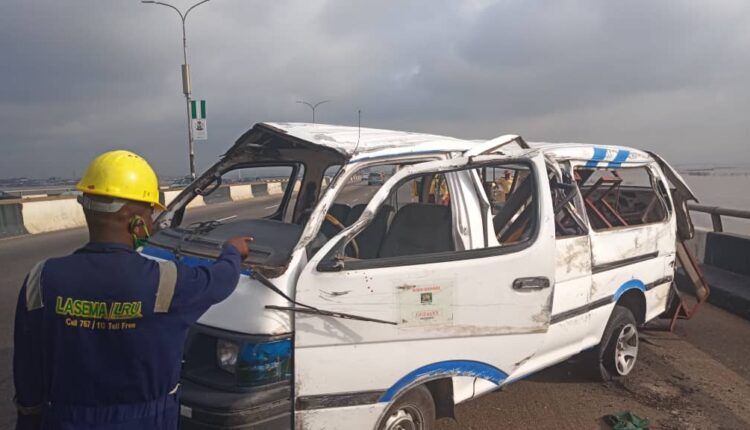 As gathered, the driver of the bus with registration number GGE 95 XY, now deceased alongside a yet to be identified passenger, was said to be in a lone accident on the Third Mainland Bridge while driving inward Iyana Oworo.

Confirming the development, the Lagos State Emergency Management Agency (LASEMA) said that the incident occurred about 6:55 am on Monday and that the two victims were recovered from the incident scene.

LASEMA’s spokesperson, Nosa Okunbor, while quoting an eyewitness account said that the accident was not unconnected to the combusted rear tyres of the bus while on motion.

According to him, the eyewitness who survived the unfortunate incident further narrated that the driver had been warned severally over his reckless driving before the incident which claimed the two lives and left others injured, occurred.

Okunbor, however, said that the surviving passengers that sustained varying degrees of injuries were administered first aid treatment and that the deceased were both evacuated to  SEHMU.

“On arrival at the incident scene, a white-coloured commercial bus (GGE 95 XY) was involved in a lone accident while driving inward Iyana Oworo. An eyewitness, an adult male, who is one of the passengers on board the bus, confirmed that the rear tyres burst while driving. He further narrated that the driver had been severally warned on his reckless driving before the incident occurred.

“Unfortunately, two persons – the driver and a passenger lost their lives (both male adults) while other passengers sustained varying degrees of injuries. SEHMU evacuated the commodities, while those that sustained injuries were administered first aid treatment,” the statement said.

Just In: 7000 Lagos widows to march against SARS tomorrow