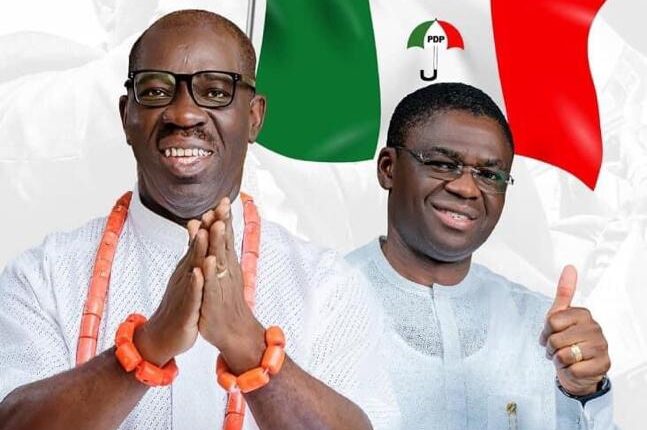 Obaseki had polled a total of 307, 955 votes to defeat his main challenger and candidate of All Progressives Congress (APC) who garnered 223, 619 votes.

Reacting to the election, Buhari congratulated the winner and urged him to show grace and humility in victory

Through a statement by his Senior Special Assistant on Media and Publicity, Garba Shehu, Buhari commended the people of Edo State, the parties, candidates and security agencies for conducting themselves responsibly.

“I have consistently advocated for free and fair elections in the country because it is the bedrock of true democratic order.

“Democracy will mean nothing if the votes of the people don’t count or if their mandate is fraudulently tampered with,” the statement said.

On his part, Atiku described Obaseki’s victory as end to godfatherism and that the exercise greatly reflects the peoples wish through results of votes announced by the electoral umpire across the 18 local government areas of the state.

Through a statement he released to newsmen on Sunday, said that Obaseki’s victory signpost the resilience that Nigerians were known from across the world.

“There is a new dawn in Edo state, and the hard won victory of Governor Godwin Nogheghase Obaseki is not just a victory, but a declaration of independence from the anti-democratic forces of godfatherism and militarism.

“No victory could be sweeter than this, and I heartily congratulate the governor, and the good people of Edo state for their resilience in the face of the forces arrayed against them.

“Edo has a rich history as the centre of Black civilisation, and to this, she is adding a new history as the bastion of Nigerian democracy. This double whammy of ancient and modern glories is a testament to a people who have for centuries set the pace as a beacon of light on the African continent,” the statement said.