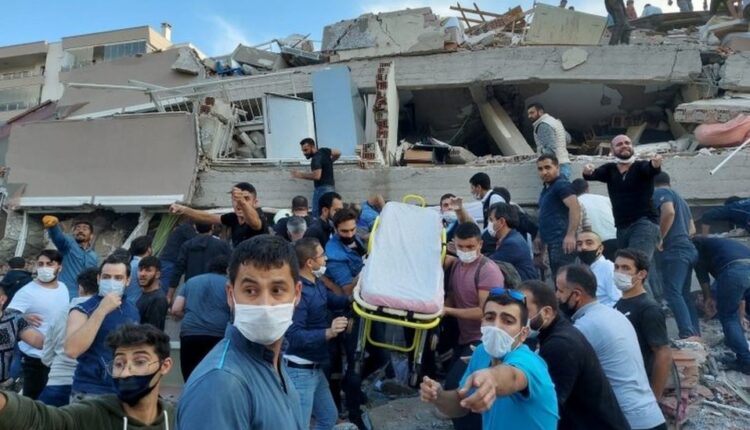 Atleast two teenagers and17 other people were confirmed to have died in Turkey and Greece after a strong earthquake struck the Aegean Sea resulting in destruction of buildings and setting off tidal waves that slammed into coastal areas and islands.

As gathered, people ran onto streets in panic in the Turkish city of Izmir on Friday during the quake that struck at a magnitude of up to 7.0.

It was learnt that the quake resulted in neighbourhoods been deluged with surging seawater which swept debris inland and left fish stranded after it receded.

Turkey’s Disaster and Emergency Management Presidency (AFAD) said 17 people died, one due to drowning, while 709 people were injured. On the Greek island of Samos two teenagers, a boy and a girl, were found dead in an area where a wall had collapsed.

Inspite of the casualties, The Guild gathered that search and rescue operations had continued by the agency to possibly rescue survivals that were trapped under rubbles in the affected communities.

The Turkey Urbanisation Minister, Murat Kurum, confirmed that over 17 buildings collapsed in Izmir and that tents with a total capacity of 2,000 people near areas with the highest damage were already been set-up.

“I am very used to earthquakes … so I didn’t take it very seriously at first but this time it was really scary,” he said, adding the earthquake had lasted for at least 25-30 seconds.

Crisscrossed by major fault lines, Turkey is among the most earthquake-prone countries in the world. More than 17,000 people were killed in August 1999 when a 7.6 magnitude quake struck Izmit, a city southeast of Istanbul. In 2011, a quake in the eastern city of Van killed more than 500.

The mayor of Izmir’s Seferihisar, Ismail Yetiskin, said that sea levels rose as a result of the quake, just as he described the quake magnitude as a small tsunami.