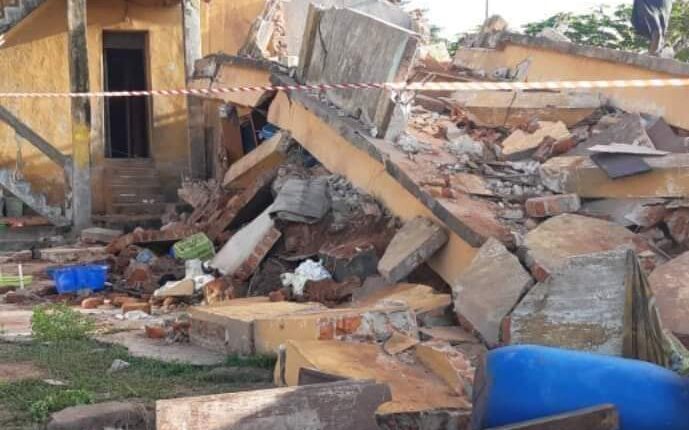 Atleast 18 worshippers have been rescued and dozens of others suspected to have been trapped when a one-storey building belonging to Salvation Ministries collapsed during a worship session in Okpanam, Oshinili North local government area of Delta state.

As gathered, the church building, which has stayed for over 10 years was initially designed as a plaza before the church occupied the upper chamber of the one storey building, converting it to its children section.

It was learnt that the building caved in from the children section of the church at about 5pm during bible studies and left scores of others trapped under the rubbles.

It was learnt that the church building, which has stayed for over 10 years was initially designed as a plaza before the church occupied the upper chamber of the one storey building.

One of the church members simply identified as Grace Ibe, stated that the service was ongoing when the building collapsed with a thunderous noise.

“We were clapping and praying when suddenly we heard the cracking and the building swallowed the children section with the children,” she said.

She said the church is currently observing its new year 21-day fasting but members of the ill-fated church came to break the fasting with a communion service.

Confirming the number of persons rescued under the rubble, the Secretary to the State Government (SSG), Patrick Ukah, said that 18 worshippers have been rescued and that they have been used to a public hospital for adequate treatment.

Ukah disclosed that of the 18 victims rescued by the emergency officials, three were in critical condition and were currently been treated by experts in the state.