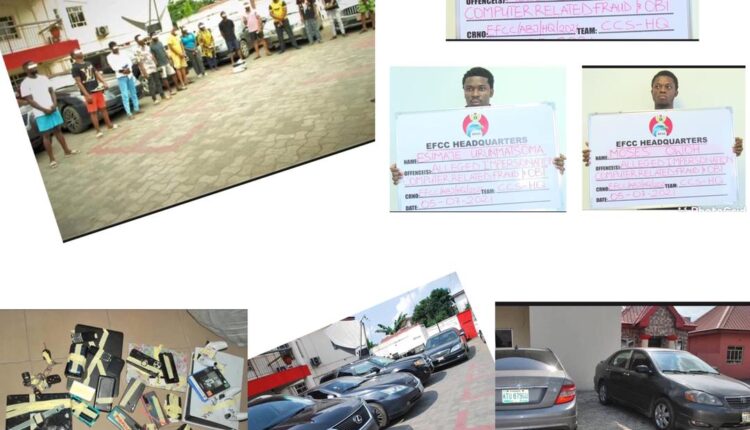 Atleast 18 entrepreneurs from Port Harcourt in River State, as well as Federal Capital Territory (FCT) Abuja could be on their way to prison if found guilty for allegedly engaging in various online scams and cyber frauds.

Of the 18 entrepreneurs been interrogated by the Economic and Financial Crimes Commission (EFCC) over their alleged involvement in cybercrime, 14 were said to reside in Rivers state while the other four chose Abuja for their trade.

As gathered, the 14 suspects, were reported to have been picked by the EFCC personnel in Port Harcourt Zonal office while four suspects were also apprehended by the personnel of the anti-graft agency attached to the commission’s Abuja Zonal Office on Monday, for engaging in online frauds.

The four entrepreneurs apprehended by the graft prevention agency in Kubwa and Jahi axis of Abuja were: Victor Wealth, Hendrix Esimeje, Merit Bareten, and Moses Owoh.

Meanwhile, six vehicles, 25 different makes of phones, three Laptops, one smartwatch, one Samsung hard drive, two power banks, one play station, one Television set, one audio victory sound, one Bluetooth device, and Universal Serial Bus (USB) speaker were recovered from the suspects from Port Harcourt, and that two exotic cars, as well as mobile phones, were seized from the four Abuja suspects.

Confirming the arrest, spokesman for EFCC, Wilson Uwajaren, through a statement made available to newsmen on Monday, stated that their arrest followed actionable intelligence on alleged computer-related fraud.

Uwajaren hinted that preliminary investigations conducted by the agency indicated that the 18 suspects had been over the years involved in impersonation, illegal possession of fraudulent documents, and a bitcoin scamming platform.

The spokesman added that the suspects have made useful statements and would be charged to court as soon as the ongoing investigations been carried out by the agency were concluded.