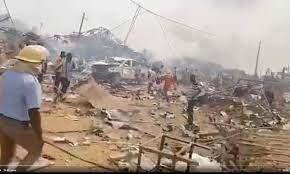 No fewer than 17 people have been confirmed dead, while 59 others were left with varying degrees of injures when a vehicle carrying explosives used in mining collided with a motorcycle and blew up in a Bogoso town, Ghana.

The explosion was said to have left 500 people homeless as several houses and  buildings were reduced to piles of wood, brick and twisted metal as officials and residents battled hard to contain the spread of the fire.

Confirming the incident through a statement released Yesterday, the country’s Information Minister, Kojo Nkrumah said that the death toll was 17, who had unfortunately lost their lives during the explosion, adding that 59 others who were rescued sustained injuries but were receiving treatment.

“A total of 17 people have unfortunately been confirmed dead, and 59 injured people have been rescued,” he said.

On his part, Ghana President, Nana Addo Dankwa Akufo-Addo, while condoling with the relatives of the deceased described the incident as an unfortunate one, adding that he wished them the strength to bear the loss and recover speedily.

“It is a truly sad, unfortunate and tragic incident, and I extend, on behalf of Government, deep condolences to the families of the deceased, and I wish the injured a speedy recovery,”  he said.

Also, the Deputy Director General of the National Disaster Management Organisation, (NADMO), Seji Amedonu,  confirmed that  500 buildings had been destroyed i n the explosion while a regional emergency official told local media that he had seen 10 dead bodies.

According to a Kinross spokesperson, the explosion had occurred when a motorcycle went under a truck carrying explosives that was on route to the Chirano gold mine, run by Canada-based Kinross, adding that  it occurred 140km  from the mine.

Also, a NADMO coordinator for Prestea Huni-Valley, Francis Yankah, said he saw a total devastation of the community which he described as shocking to see how the community came down in shreds beyond habitationafter the incident.

“I saw complete devastation of the community called Apiate. As we speak, the community is dead, it cannot be inhabited by anyone.” he said.

Meanwhile, the police released a statement advising the public to move out of the area to nearby towns for their safety while recovery efforts are under way, adding that nearby towns have been asked to open up public spaces including classrooms and churches to survivors.