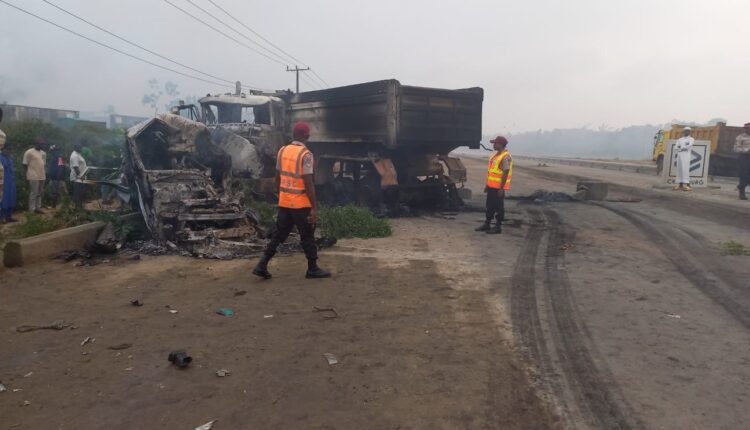 Atleast 16 passengers have been confirmed to have died and five others sustained varying degrees of injuries during an auto crash that occurred in Epe Local Government, Lagos State.

As gathered, 23 male passengers were involved in the accident and of this number, two escaped unhurt while five were rushed to the hospital by the Federal Road Safety Corps, Lagos Command, and 16 died.

It was learnt that the accident occurred at about 3 am on Tuesday when the commercial vehicle conveying the passengers and an articulated truck collided and their vehicle went up in flames.

Eyewitnesses at the scene narrated that the commercial bus and the truck were razed before rescue officials arrived at the scene to prevent further tragedy around the axis.

Confirming the tragedy, the FRSC Public Education Officer of the command, Olabisi Sonusi, disclosed that preliminary investigations revealed that the accident occurred due to impaired visibility and reckless driving from both drivers.

Sonusi, who noted that the emergency management agencies are onground ensuring prompt recovery and evacuation of all crashed vehicles, added that the white bus is with number plate KTN 262YJ while that of the articulated truck was unknown.

Through a statement made available to newsmen, the FRSC spokesperson stressed that the road has been cleared of all encumbrances that could prevent vehicular movement around the axis.

“He also admonished motoring public to always observe construction signage and speed limits at such zones, just as he commiserate with the families of the deceased, while wishing the injured quick recovery”.

The Permanent Secretary, Lagos State Emergency Management Agency (LASEMA) Dr. Olufemi Oke-Osanyintolu, revealed that the truck was conveying sand before it collided with the commercial bus within the axis.

“Furthermore, the two vehicles got burnt as a result of the impact of the collision, and that some of the deceased passengers that were burnt to death were indigenes of Katsina state”.

The LASEMA boss, meanwhile, disclosed that all the deceased passengers have been handed over to their relatives for onward burial in accordance with the faith.