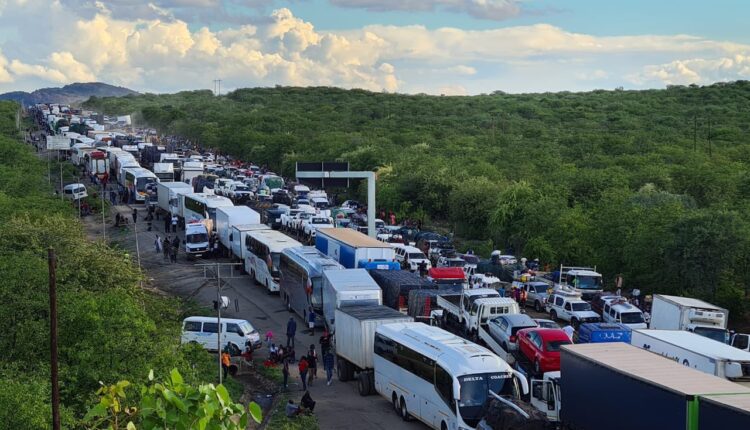 At least 15 travellers were reported to have slumped on queue and died trying to cross the South African border to Zimbabwe for the Christmas celebration.

The 15 deceased were said to have died on South African side of the Beitbridge border with Zimbabwe while waiting to be cleared by the immigration authorities that had slowed down operations to comply with COVID-19 protocols.

As gathered in the Images and videos obtained, showed lines of stationary cars, mainly trucks, stretching for kilometres on the narrow road leading to the inland Beitbridge port that serves as the main crossing point between the countries.

It was learnt that the route had become busier than previous weeks considering the time of the year when Zimbabwean migrants return to their hometown for the festivities.

Efforts to get the South African health ministry, Department of Home Affairs, and law enforcement agency for confirmation of fatalities has continued to prove abortive.

Meanwhile, eyewitnesses have attributed the casualties recorded at the border to exhaustion and ill health owing to a lack of facilities while waiting to cross the border, sometimes for days.

As learnt, South Africa, which the United Nations claimed play host to an estimated 1.5 million Zimbabwean migrants, was suffering a second wave of COVID-19 infections.

Authorities suspect the surge in cases has been triggered by a genetic mutation of the disease with positive cases exceeding the 1 million marks, becoming the country with highest cases of COVID-19.

Asked about the border delays in an interview on news channel eNCA, the director-general of South Africa’s Health Department, Sandile Buthelezi, said that coronavirus screening for outgoing traffic had now been suspended but proof of a negative COVID-19 test performed within 30 days would be required upon re-entry.

“The main backlog was outgoing trucks. We don’t require a test when you’re going out of the country,” Buthelezi said.

WHO cautions Nigerians against COVID-19 contravention during festivities