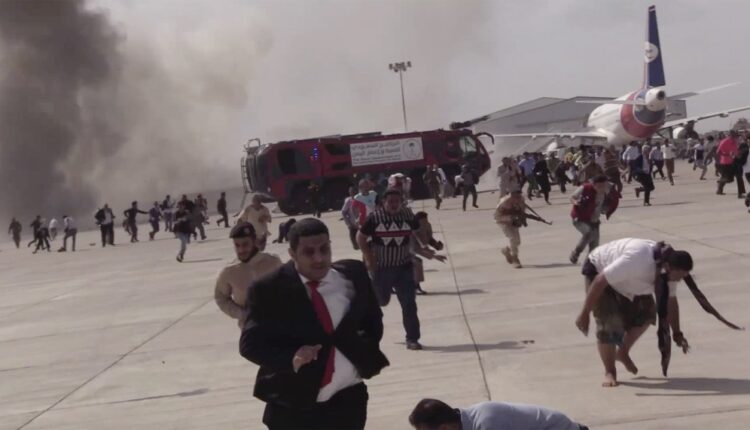 At least 13 people were reported to have been killed in three separate explosions that rocked Aden airport in Yemen, hours after officials of the newly formed government arrived in the capital.

Aside from the casualties, over 65 people including travelers sustained varying degrees of injuries after the explosion that crippled commercial activities in Yemen’s southern port city of Aden.

A Yemeni security source, who preferred anonymity, told newsmen that the blasts targeted the VIP lounge at the airport, which is under the control of the Southern Transitional Council (STC) forces.

It was gathered that all the members of the Yemeni government arrived at the presidential palace of Maasheeq in Aden, without any of them being injured in the blasts.

Confirming the number of victims on Wednesday, the Aden Governor, Ahmed Lemles, in a statement made available to newsmen, and assured the public efforts were on to avert another casualty.

Yemeni Prime Minister, Abdulmalik Saeed, In a statement on its official social media handle, said: “the members of the government are in Aden and everyone is fine. The cowardly terrorist act that targeted Aden airport is part of the war being waged against the Yemeni state and our great people.

“This act will only boost our determination to carry out our duties until the end of the coup [carried out by the Houthi group in 2014] and the restoration of the state and stability,” the premier added.

Information Minister Moammar Al-Eryani, meanwhile, accused the Houthi rebel group of staging the attack, saying, the cowardly terrorist attack carried out by the Iranian-backed Houthi militia on Aden airport will not deter us from carrying out our national duty.