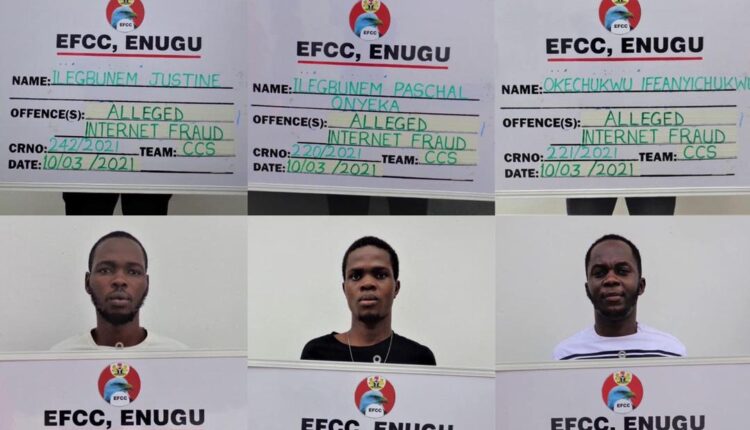 A Federal High Court sitting in Enugu State has sentenced no fewer than 12 undergraduates from varsities in the state to two years imprisonment for engaging in internet frauds.

These students were docked by the Enugu Zonal Office of the Economic and Financial Crimes Commission (EFCC) before the court presided over by Justice I.M Buba on a separate one-count charge that bordered on forgery, impersonation, and obtaining money from unsuspecting foreign nationals under false pretenses.

The charge brought by EFCC against one of the defendants on Wednesday, reads, “that you Mbanugo Ifeanyi on or about the 10th Day of March 2021 within the jurisdiction of this honourable Court fraudulently impersonated on Ornale Sylvestermanda and Venita, through a fake Telegram account, with intent to obtain money from unsuspecting foreign nationals.

Ifeanyi was found to have committed an impersonation offense that was contrary to section 22(3) (a)(b) of the Cybercrimes Prohibition, Prevention, Etc) Act,2015 and punishable under section 22 (4) of the same Act.

Delivering judgment on the case, Justice Buba found the defendants guilty of the charge brought against them and thereby convicted as well as sentenced them to two years imprisonment with a fine option of N1, 000,000 each.