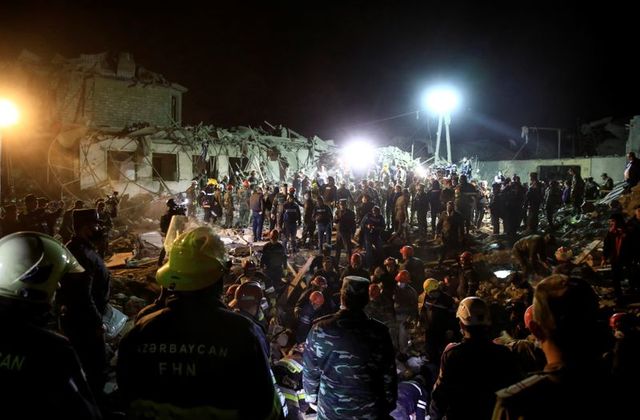 Of the 12 victims of attack on Ganja, two were said to be children, and that several children were among the residents that sustained injuries after the missiles struck the city miles away from the contentious zone between Armenia and Azerbaijan.

According to Azerbaijan National Agency for Mine Action (ANAMA), missiles fired at Ganja were identified as SCUD/Elbrus Operative-Tactical Ballistic Missile.

Before the attack on Ganja, Azerbaijan air defense alleged that earlier on Saturday at about 1 am, it destroyed Armenian missiles launched on a hydroelectric power plant in Mingachevir.

Confirming the attack, Azerbaijan president’s aide, Hikmet Hajiyev, in a statement made available to newsmen on Saturday, stated that findings at the scene proved that the missile was fired by the Armenian army and that the death toll was still 12.

Hajiyev added that the emergency officials were still at the scene to save residents that were trapped under the rubbles and provide relief materials to those that have been rendered homeless; more than 20 houses were destroyed.

“Innocent civilians in the second biggest city of Azerbaijan are under the indiscriminate and targeted missile attack of Armenia. Unscrupulous calls for humanitarian ceasefire should see these war crimes of Armenia,” he said.

Reacting over the attack, Turkey’s ruling party spokesman, Omer Celik reiterated support for Azerbaijan and condemned Armenia’s attacks on Ganja, describing it as a war crime.

“Armenia is killing civilians as a rogue state. It is carrying out brutal massacres. The murderers and their supporters are breaking the law. Attacks against Ganja are crimes against humanity,” Omer Celik said on Twitter, noting the attacks and massacres will not go unpunished before adding that Armenia must be convicted in the name of humanity and law.

“As in Khojali, it [Armenia] kills women, children, the elderly and civilians indiscriminately. Armenia will pay for these unlawful acts and murders,” Ibrahim Kalin wrote on Twitter in reference to the Armenian massacre of 600 Azerbaijani civilians in 1992.

“Turkey stands with Azerbaijan to the very end,” he said. It is meaningful that countries and international organizations that have a say on every issue remain silent on occupant Armenia killing civilians,” Kalin added.