2022 Osun poll and the naked dancers 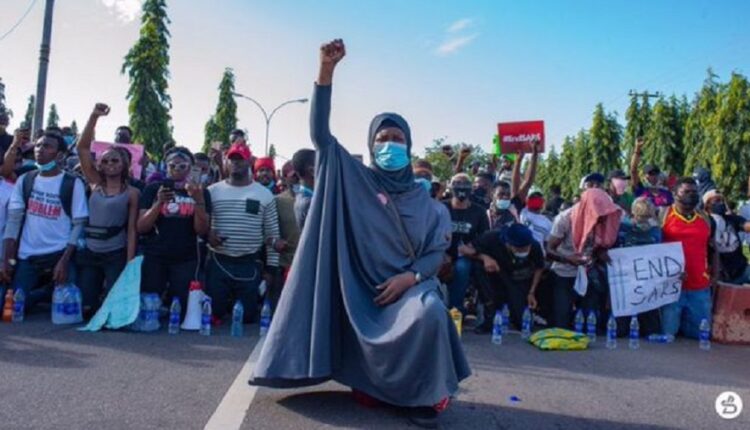 The Socio-Economic Rights and Accountability Project (SERAP) and 116 concerned Nigerians have filed a lawsuit asking the Federal High Court in Abuja to direct and compel President Muhammadu Buhari to take immediate steps towards arresting soldiers and police officers indicted by the Lagos #EndSARS panel report on the shooting of peaceful protesters at the Lekki toll-gate, and police brutality cases.

In the case with suit number FHC/ABJ/CS/1482/2021, SERAP and the 116 others were also asking the court to compel the President to bring to justice anyone responsible for the shooting of peaceful protesters and to ensure access to justice and effective remedies for victims, including adequate compensation.

The applicants, who joined in the suit filed as a respondent was the Minister of Justice and Attorney General of the Federation, Abubakar Malami, were arguing that: “It is in the interest of justice to grant this application, as it would improve respect for Nigerians’ rights, the rule of law, and public confidence in government institutions, as well as reduce the growing culture of impunity of perpetrators.”

SERAP said: “The safety of protesters in Nigeria remains as precarious as ever, and impunity for crimes against them is growing. Impunity emboldens perpetrators. A failure to bring to justice those indicted for the shooting of peaceful protesters is, in itself, a violation of the rights to life and human dignity.”

According to SERAP: “The flagrant lack of accountability for past violations of the rights of protesters has given rise to a growing sense of powerlessness, and resentment not only among victims and their families but among the general public.”

SERAP also said: “The failure to promptly arrest, and bring to justice those suspected to be responsible for the shooting of peaceful protesters, and to ensure access to justice and effective remedies for victims and their families amounts to a travesty of justice, as justice delayed is justice denied.”

SERAP is also seeking “an order of mandamus to direct and compel President Buhari to ensure that those still being detained solely for peacefully exercising their human rights are immediately and unconditionally released, and all charges against them are dropped.

SERAP is further seeking “an order of mandamus to direct and compel President Buhari to ensure full and effective respect for the human rights of everyone across the country, including the rights to life, dignity, freedom of expression, peaceful assembly, and association.”

The suit filed on behalf of SERAP by its lawyers Kolawole Oluwadare and Opeyemi Owolabi, read in part: “The Buhari administration has the constitutional responsibility to allow victims of human rights violations to find out the truth in regard to acts committed, to know who the perpetrators of such acts are, and to obtain justice and adequate compensation.”

“The right to life is an inherent, core, and non-derogable human right, regardless of the circumstances, and even in times of armed conflict or states of emergency. Summary, extrajudicial, or arbitrary executions are clearly prohibited under the Nigerian Constitution of 1999 [as amended] and international law.”

“The UN Principles on the Effective Prevention and Investigation of Extra-Legal, Arbitrary, and Summary Executions affirm that ‘extra-legal, arbitrary, and summary executions’ cannot be carried out under any circumstances.’”

“According to the principles, ‘governments shall prohibit orders from superior officers or public authorities authorizing or inciting other persons to carry out any such extra-legal, arbitrary or summary executions. All persons shall have the right and the duty to defy such orders.”

“International law requires that the use of lethal force, such as firearms, is an ‘extreme measure’ that should only be considered when strictly necessary in order to protect life or prevent serious injury from an imminent threat.”

“Articles 2(1) and 2(3) of the International Covenant on Civil and Political Rights to which Nigeria is a state party require State Parties to ‘undertake to respect and ensure’ and provide effective remedies for violations of the rights in the Covenant.”

“The remedies must be accessible and effective remedies and take into account the special vulnerability of certain categories of person.”

“The General Assembly of the United Nations adopted a set of principles relating to states’ obligations to the victims of serious violations of international human rights law that makes clear that states are obligated to investigate violations of international human rights law thoroughly and impartially, and where appropriate, take action against those allegedly responsible.”

“States also have the duty to investigate and, if there is sufficient evidence, the duty to submit to prosecution the person allegedly responsible for violations.”

“President Buhari has a constitutional duty, being the Chief Executive Officer of the Federation and the Commander-in-Chief of the armed forces, to ensure access to justice and effective remedies for victims, and that there is no impunity for allegations of human rights violations.”

The suit followed the submission of the Lagos #EndSARS panel report on the Lekki shooting incident and police brutality cases to the state governor, Babajide Sanwo-Olu. The leaked report is said to have indicted some soldiers and police officers for “the shooting of protesters, leading to grievous injuries and deaths.”

The panel reportedly found that “the shooting of protesters at the Lekki toll-gate on October 20, 2020 was unwarranted, excessive, provocative and unjustifiable in the circumstances of the state of the protests, which was peaceful and orderly.”

No date has been fixed for the hearing of the suit.