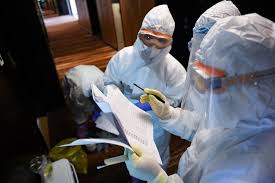 The Chinese Government has disclosed that around 111 persons of African descent have tested positive for the global coronavirus pandemic in Guangzhou city, following the implementation of its new disease assessment protocols.

It would be recalled that China had recently come under backlash from various countries over its alleged mistreatment of resident African nationals, who were alleged to have been forcefully quarantined and tested for the covid19 infection.

The country’s government had explained that in a bid to curb spread of the viral disease within its borders, all foreign nationals, irrespective of race, would be quarantined and tested for coronavirus, in a move which many countries including Nigeria, Ghana, South Africa and the United States of America, amongst others, disagreed with.

The Executive Vice Mayor of Guangzhou city, Chen Zhiying, while speaking to newsmen in the country on Tuesday, confirmed that a total of 111 African persons had tested positive for the novel infection in the city and that at least 19 of the confirmed cases were imported cases.

Zhiying stated that though a total of about 4,553 Africans had been tested for the infection, only 111 of those tested had received positive coronavirus test results and that 92 of the newly confirmed patients were residents in the city who had no recent travel history.

He said that the assessment had been carried out following the nucleic acid testing method and that all tests in Guangzhou had been taken on April 4, 2020.