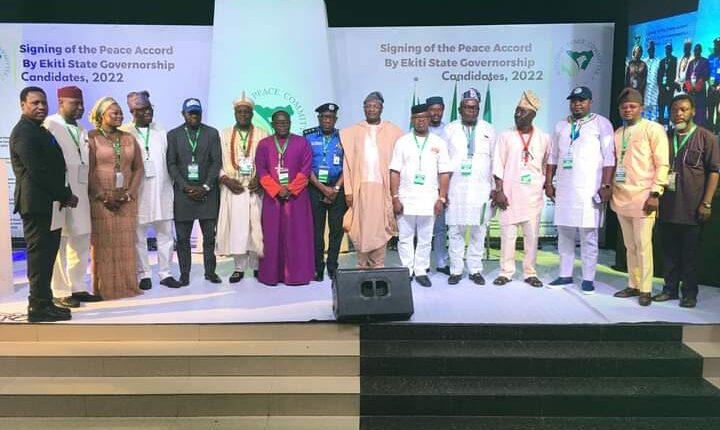 No fewer than five governorship candidates have turned down requests to sign a Peace Accord that would commit them to embrace free, fair, and credible election in the state.

Meanwhile, 11 others have signed the document, promising the electorate that whatever the outcome of the poll in the state, they would accept it.

They signed the path on Wednesday before the a former head of State, Gen. Abdulsalami Abubakar (retd)-led National Peace Commission (NPC), in Akure, the Ekiti State capital.

The former military Head of State and Chairman of NPC, at the occasion,  appealed to the people of the state to live up to the ideals of integrity and honour to have a free, fair, and credible election on Saturday.

At the event held in Ado Ekiti, Abdulsalami called on the Independent National Electoral Commission (INEC) to ensure that the Ekiti governorship poll is free of rancour and devoid of rigging.

Urging the citizens to be patient and conduct themselves orderly, Abdusalami appealed to INEC to ensure that obstacles are not placed on the path of the people to exercise their franchise at the poll.

Abdulsalami, who was represented by the convener, the National Peace Committee, and Catholic Bishop of Sokoto Diocese, Matthew Kukah, said 11 governorship candidates signed the accord, while five were absent.

The former head of state called on residents in the state to take advantage of the off-season election provided to vote to install leaders of their choice.

“We are now witnessing a joyful surge of excitement across the country over the issue of voter registration. Nigerians are now using various platforms from faith-based association, civil society groups, ethnic and community platforms to assist other federal and state government agencies to encourage voter registration among our people.

“Since the 2015 elections, when the NPC came into being, we at the NPC have over the years gradually been woven into the beautiful fabric of the good work of the INEC.

“The collaboration has given birth to the various successful amendments to the electoral law, which has also helped to strengthen the confidence of Nigerians in the electoral processes,” he said.

The NPC appealed to the people to come out and vote and ensure that they stay alive to witness the good governance the governor they are electing would bring to the fore.

In his submission, the INEC Chairman, Prof. Mahmood Yakubu, said the intervention of NPC has contributed in no small measure to the sustenance of peace in the country.

Yakubu said no credible election can be achieved in a violent environment, adding that INEC would give a transparent and credible election, noting that the votes of Ekiti people will count.

The Chairman, Ekiti State Council of Traditional Rulers, Oba Ayodele Adejuwon, said the Obas in the state would not tolerate any bloodshed during the poll, calling on Ekiti people to vote without violence.