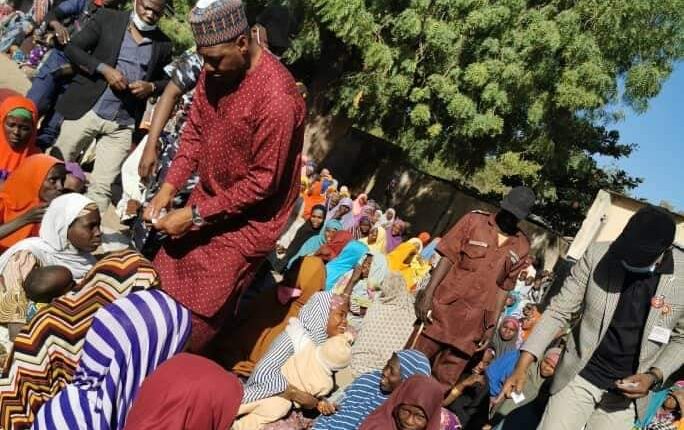 Atleast 10,000 Internally Displaced Persons (IDP) families in Borno State would be starting the year with a sigh of relief after benefiting from food items and cash palliative distributed by the state Governor, Babagana Zulum.

The distribution of food items and cash palliative which were aimed at bringing succour to the IDPs was supervised by the governor on Sunday as part of planned activities for his stay in Damasak, the shores of Lake Chad.

As gathered, each of the 10,000 families received 25kg of rice 25kg of beans, 25kg of maize and 5 litres of cooking oil as part of interventions aimed at helping them ameliorate their present condition and sustain them till such times they can generate livelihoods for themselves in Damasak.

Damasak, headquarters of Mobbar Local Government Areas in northern Borno, is a former stronghold of Boko Haram insurgents before it was liberated with citizens now resettled by Zulum.

Zulum traveled to Damasak on Saturday and launched the distribution of water pumps, fertilizer, seeds, chemicals and five thousand naira cash to each of 1,200 irrigation farmers embarking on food cultivation this dry season.

The governor traveled with Senator Abubakar Kyari, the senator representing northern Borno, who is also an indigene of Damasak. Also in his entourage was the state Caretaker Chairman of the APC, Ali Bukar Dalori, Commissioner for Agriculture, Engr Bukar Talba and some stakeholders with affiliation to Mobbar LGA.