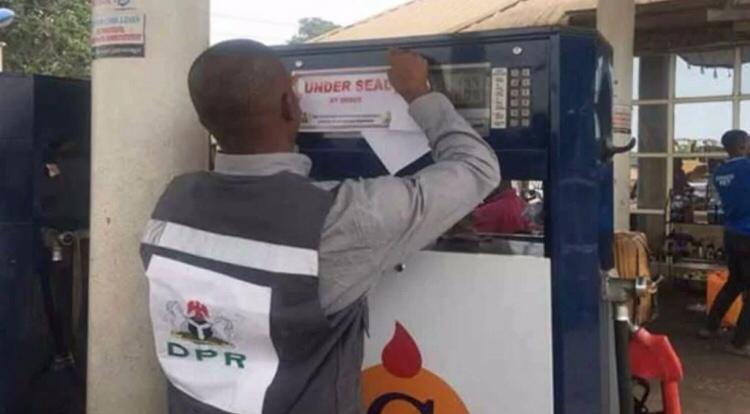 The Department of Petroleum Resources (DPR), said it has sealed 10 filling stations for allegedly selling petroleum products above the official pump price approved by the Federal Government.

As gathered, the 10 petrol stations were sealed for not selling petrol between N162 to N165 per litre which was the government-approved price for the product across the country.

The DPR Taraba Zonal Operations Controller, Jeremiah Mashat, who led the enforcement team, noted that the sealed petrol stations must pay sanctions for violating the stated rules, adding that it would serve as a deterrent to many other potential violators.

Speaking on the development, Mashat explained that the action was to ensure that filling stations across the country complied with the government-approved price.

He noted that marketers must adhere to all regulations governing the downstream sector of the petroleum industry in Nigeria to give motorists and other users of the products ability to plan their spendings.

According to him, we are out to ensure that those who use petroleum products in the state are not shortchanged by the filling stations in Taraba.

“Today, we were able to seal 10 filling stations in Jalingo. Before now, we sent out a team that monitored the sale of the product and as well warned them not to sell above government-approved prices. he stated.

“To our dismay, some of the marketers went ahead and violated the order, and that is why we had no option but to sanction them accordingly.

“They must pay fine for violating our rules and that will serve as a deterrent to many other potential violators,” Mashat said

However, the Chairman of the Independent Petroleum Marketers Association of Nigeria (IPMAN), Taraba chapter, Lukman Mohammed, has faulted the move by DPR and argued that the clampdown was unnecessary due to the recent increase in depot charges.

The chairman, meanwhile, disclosed that the union would hold a meeting with the DPR and discuss how to resolve the impasse between both parties.