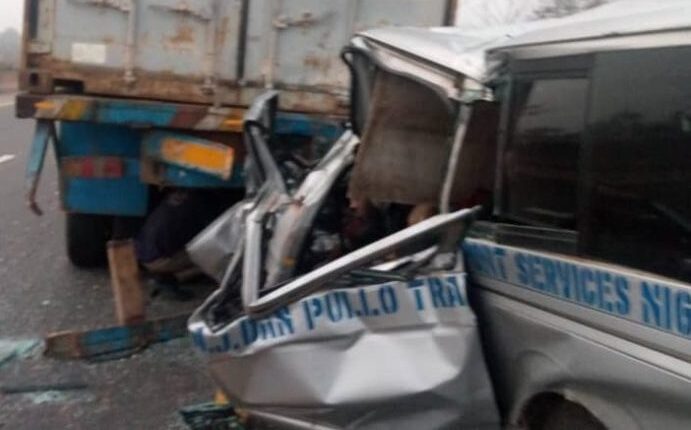 No fewer than10 passengers were reported to have died and two others sustained injuries during an auto crash that occurred along Lagos-Ibadan Expressway.

As gathered, 19 passengers were said to be involved in the accident that occurred around the Oniworo end of the road but seven others escaped the accident scene unhurt.

The Public Education Officer, the Federal Road Safety Corps (FRSC), Florence Okpe, who confirmed the casualities, said that the accident occurred on Saturday.

According to Okpe, the suspected causes of the accident were road obstruction on the part of a truck and excessive speed of a Toyota bus whose driver lost control and ran into the truck at the rear.

The FRSC image maker said the injured victims were taken to Victory Hospital Ogere for medical attention, while the corpses were deposited at Ipara morgue.

The Ogun State Sector Commander of FRSC, Ahmed Umar, described the accident as pained, stressing that the driver refused to abide by simple road guidelines.

Umar called for caution over poor visibility due to harmattan haze, saying motorists should put on their headlamps when the weather is poor.

He urged motorists, especially truck drivers, to always display caution signs whenever there is a breakdown on the road.

The sector commander commiserated with the families of the victims and asked them to contact the FRSC Ogunmakin for more information about the crash.