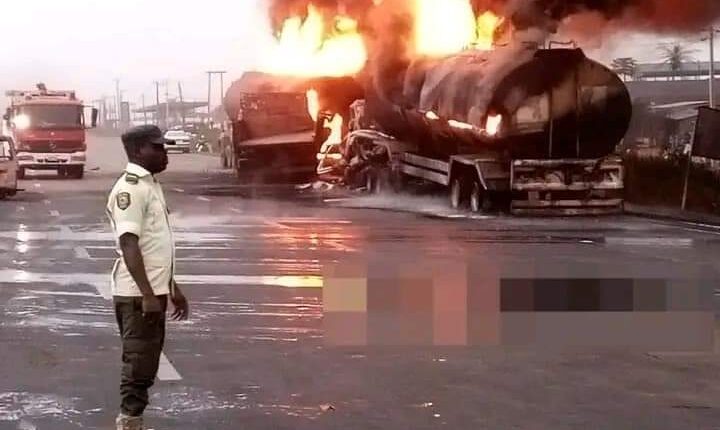 No fewer than 10 persons have been reported to dead and two others sustained varying degrees of burns when a tanker explosion occurred on Lagos-Ibadan Expressway.

It was learnt that the explosion that occurred around Sagamu end of the road and wreak a tanker laden with petroleum products, a truck and commercial bus.

The Guild gathered that the tragedy that claimed lives of these 10 persons occurred when the tanker moving outward Lagos section had collided with the other vehicles and later exploded.

He disclosed that 12 persons were involved in the inferno that emanated after the explosion, but 10 persons could not escape while the other two occupants only sustained injuries.

The FRSC official added there was a possibility of discovering more casualties as recovery efforts were still ongoing.

Umar said the burnt persons where taken to Olabisi Onabanjo Teaching Hospital in Sagamu while some of the burnt vehicles were towed off the road leaving the two tankers for the fuel content to be transloaded.